The Aegis Solo 2 – also known as the S100 – is the latest addition to the Aegis range from Geekvape. With its maximum power of 100 watts, its 18650 battery, its 3 operating modes, its certified robustness and its 1.08 inch TFT screen, it is worthy of the other models in the range.

The Aegis Solo box – or S100 – has a silicon coating. It is more compact, lighter and more robust than its predecessor and is IP68 certified for water and dust resistance. In addition, it is able to withstand shocks. With such strength, the user can take it with him and use it wherever he wants, especially since the device is equipped with a protective notch to lock the main button. This prevents accidental ignition. 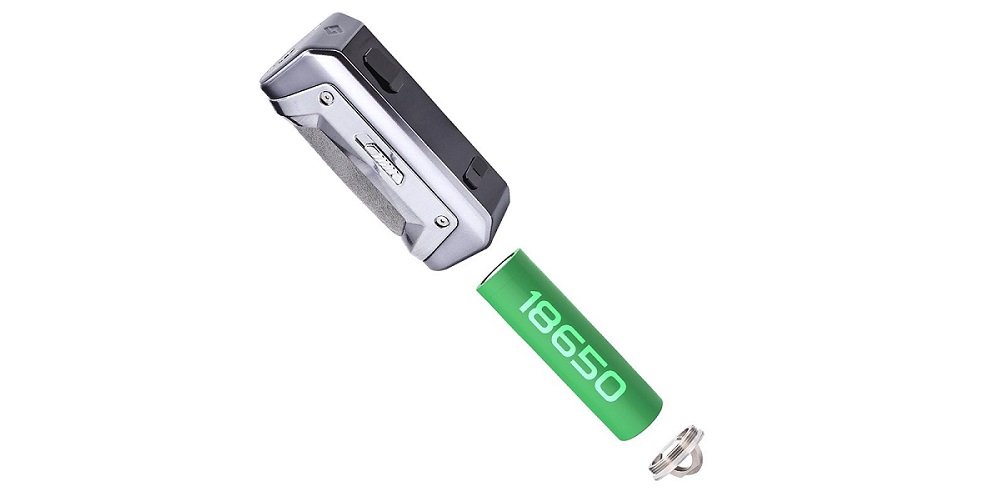 The Aegis Solo 2 also dazzles with its performance. The maximum power output is 100 watts and the single 18650 battery (not included) provides several hours of battery life. The battery can be charged via the USB Type-C cable (included), but an external battery charger is recommended. There are 3 operating modes : VW, VPC, Bypass.

The Stealth feature allows you to use the kit with the screen turned off.

Although the box is smaller than the first Aegis Solo, its TFT screen has the luxury of being larger, reaching a size of 1.08″. Thanks to the screen and its new user interface, the user will be able to see a lot of useful information such as the power, the remaining battery level or the number of puffs. He will be pleased with the clear, easy-to-read display.

It should be noted that the box accepts coils with a value between 0.1 and 3 ohms.

The Aegis Solo 2 / S100 box from Geekvape has some solid arguments that are sure to seduce. This compact, beautiful and high-performance model maintains the great reputation of the manufacturer.

The Spanish manufacturer 70/Thirty presents the Breeze RTA. A rebuildable atomizer that accepts single or double coil assemblies. In 2 or 4ml, this atomizer measures 46 mm high and has a diameter of 25 mm. It will fit many boxes.

Its 810 drip tip and adjustable airflow can produce large clouds of steam.

Aspire has no equal when it comes to creating quality kits. This Zelos Nano proves it. With an integrated battery of 1600 mAh, 3 power levels and 2 operating modes, this kit has obvious assets to rise to the level of excellent kits. In addition, the Nautilus Nano serves as an atomizer. The user will be able to take advantage of its capacity of 2 ml, its adjustable airflow and its compatibility with Nautilus coils.

The Zelos Nano from Aspire is intended for MTL smoking. It is an ideal kit for beginners.

Ambition Mods unveils a new device that can be used in box or tube format simply by doing a little DIY.

This mod can work with a battery 18650 or 18350, depending on the format for which you choose and to deliver up to 50W ofpower. In box format, it is possible to add an atomizer up to 27mm in diameter and in tube format 23mm.

It is possible to vary the modes of operation through a 0.49" OLED screen.